Still coming to a bookstore near you

Last May I posted about a book I've been wrestling with since 2009, Evolution Device.  I had hoped to get at least a digital version online before now, but that hasn't happened.  What happened instead was a professional editor.

I thought the book was ready to go.  But no.  I didn't realize what I was getting into with a pro editor, because, silly me, I thought that the book was nearly ready for publication.  I thought maybe I'd just pay this editor to nitpick the manuscript and I'd be giving readings and autographing books in bookstores in short order.

The editor was kind.  She softened the critique by letting me know the book had potential  But then she identified a few plot points she didn't understand and other areas that she had questions about.

Three pages of areas that she had questions about.

At first I was overwhelmed.  I waited a few days, then started with some of the issues that looked easiest to fix.  Was that  movie star I referred to really a star in that year?  Why did that character just disappear?  Why was I spelling Magick the way I was spelling it, and would readers understand what I meant?

Which is why I hired a professional editor in the first place.

And the result is...

Now the manuscript is shorter because I ended the tale in a different place.  It's tighter because I corrected a point of view continuity problem that, in doing so, fixed other problems.  I took out some backstory that just wasn't necessary.  I added a couple plot twists in passing, and I fleshed out a few characters that could use the extra weight of words.

I had no idea I could do all that.  I impressed myself mightily.

But it's not over yet

You'd think by now I'd be sick of this whole thing, but au contraire!  Just this afternoon I finished editing a print-out of the manuscript, all 345 pages of it.  It took three days.  When I was done with the last page, amazingly, I still loved my book.

So hey, I've got a fan-base of one already!

The manuscript goes back to the editor after I've made the corrections to the digital file, probably in just a day or two.  She had told me that if I resolved the issues she had pointed out, it'd be ready for an agent.  Those words alone kept me going at the revision.  But she's a pro, she knows when to use the whip and when to use the carrot.

Once she's done with it the manuscript will be copy-edited, because I want a candidate agent and/or publisher to have a polished novel to enjoy without the distracting goofs, typos, and dumbnesses that can ruin the reading experience.

And oh, the blurb

A blurb is a description of a book in a few short paragraphs that gives potential readers an idea of what the book's about.  It might appear on a back cover or on Amazon or be sent to a book reviewer -- it's a worm on a hook to get people to buy a book (you didn't know I was a poet, did you?).  Almost a year ago in my blog post about this book, I provided a draft of a blurb, but I think this one is better.  It is, of course, subject to change.

They call it a gift, but sometimes gifts are really curses.

Eddie Edmunds was born to be a shaman to his people in remote New Mexico.  Instead he finds himself on the slippery path of fame and fortune as a rock guitarist in music-crazed London in the early 1970s.

Eddie's gift is not what it seems.  His extraordinary skills with music are actually manifestation of a power that some would consider magic.  When Eddie inadvertently calls his Muse into physical being, Lilith must learn how to act in a human world where she has no place, and where being in a physical body is not always what it was expected to be.

Lilith must not only be the Muse who provides inspiration for Eddie's music, but she must provide a way for him face his fears.  He must control his gift before he -- and she -- are destroyed by the wild power.

I've also been playing with book covers, not that a publisher normally lets an author have a say in that.  Here's one I did early on that I still very much like. 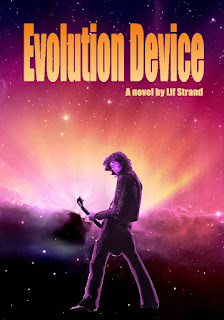 Evolution Device, a novel of music and magic